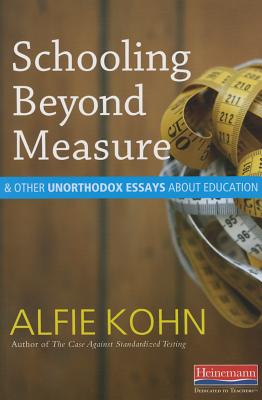 Schooling Beyond Measure and Other Unorthodox Essays about Education

In this collection of provocative articles and blog posts originally published between 2010 and 2014, Alfie Kohn challenges the conventional wisdom about topics ranging from how low-income children are taught, to whether American schools have really fallen behind those in other countries. Why, he asks, do we assume learning can be reduced to numerical data? What leads us to believe that standards-based grading will eliminate the inherent limitations of marks? Or that training students to show more grit makes sense if the real trouble is with the tasks they've been given to do?

Kohn's analytical style-incisive yet accessible-is brought to bear on big-picture policy issues as well as small-scale classroom interactions. He looks carefully at research about homework, play, the supposed benefits of practice, parent involvement in education, and summer learning loss-discovering in each case that what we've been led to believe doesn't always match what the studies actually say. Kohn challenges us to reconsider the goals that underlie our methods, to explore the often troubling values that inform talk about everything from the disproportionate enthusiasm for STEM subjects to claims made for more effective teaching strategies.

During these dark days in which teachers are viewed as expendable test-prep technicians, and global economic competitiveness eclipses what children need, Kohn calls for us to summon the courage to act on what we already know makes sense.

Alfie Kohn writes and speaks widely on human behavior, education, and parenting. The author of thirteen books and scores of articles, he lectures at education conferences and universities as well as to parent groups and corporations. Kohn's criticisms of competition and rewards have been widely discussed and debated, and he has been described in Time magazine as perhaps the country's most outspoken critic of education's fixation on grades and] test scores.

Alfie Kohn was recently described by Time magazine as perhaps the country's most outspoken critic of education's fixation on grades [and] test scores. He is the author of 13 books on education and human behavior, including The Schools Our Children Deserve, The Case Against Standardized Testing, and The Homework Myth. A former teacher, Kohn now works with educators across the country and speaks regularly at national conferences. He lives (actually) in Belmont, Mass. and (virtually) at www.alfiekohn.org.
Loading...
or support indie stores by buying on