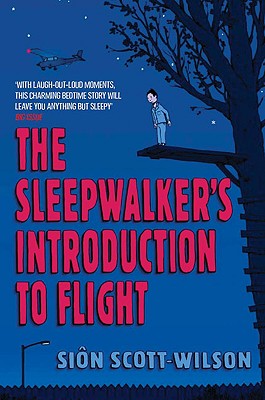 The Sleepwalker's Introduction to Flight

Dreaming of joining the brotherhood of Acapulcan cliff divers, young Mikey Hough rigs a diving platform in the garden of his suburban home. His first attempt goes rather awry, however, and two years later, he finally awakes from his coma. Mikey soon befriends Roger, an elderly ex-pilot hospitalized when his precious Distinguished Flying Cross medal was violently stolen from him. Mikey soon learns that his own disastrous attempt at flight has damaged his Suprachiasmatic Nucleus, destroying his ability to sleep. The medical profession can do nothing for him, and he is sent home from the hospital to die. One night, a despondent Mikey stumbles across Livia, the cynical local teenager. Together they decide to track down Roger's stolen medal, and so begins a remarkable, picaresque journey into the dark heart of suburbia during which the fearless Mikey and Livia confront a sprawling cast of pensioners, policemen, and criminals. As they hurtle toward daybreak, they persuade Roger to undertake one last, gut-wrenching sortie into the night skies.

Sion Scott-Wilson works in advertising and has won many industry awards for his television work, including a BAFTA nomination.
Loading...
or
Not Currently Available for Direct Purchase