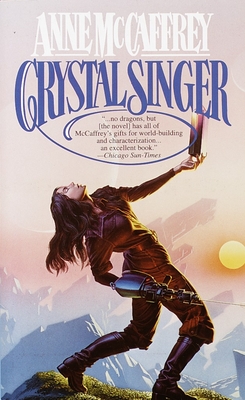 “No dragons, but [Crystal Singer] has all of [Anne] McCaffrey's gifts for world-building and characterization . . . an excellent book.”—Chicago Sun-Times

Her name was Killashandra Ree; and after ten grueling years of musical training she was young, beautiful—and still without prospects.

Then she heard of the mysterious Heptite Guild on the planet Ballybran, where the fabled Black Crystal was found.

For those qualified, the Guild was said to provide careers, security, and the chance for wealth beyond imagining. The problem was, few people who landed on Ballybran ever left.

To Killashandra the risks were acceptable . . .

“No dragons, but [Crystal Singer] has all of [Anne] McCaffrey's gifts for world-buildingand characterization . . . an excellent book.”—Chicago Sun-Times

Anne McCaffrey, one of the world’s most popular authors, is best known for her Dragonriders of Pern® series. She was the first woman to win the two top prizes for science fiction writing, the Hugo and Nebula awards. She was also given the American Library Association’s Margaret A. Edwards Award for Lifetime Literary Achievement in Young Adult Fiction, was inducted into the Science Fiction Hall of Fame, and was named a Science Fiction Writers of America Grand Master. Born in Cambridge, Massachusetts, in 1926, McCaffrey relocated to Ireland in the 1970s, where she lived in a house of her own design, named Dragonhold-Underhill. She died in 2011.
Loading...
or
Not Currently Available for Direct Purchase