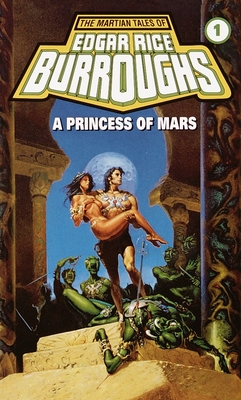 A Princess of Mars

Suddenly projected to Mars, John Carter found himself captive of the savage green men of Thark. With him was Dejah Thoris, lovely Princess of Helium. And between them and rescue lay a thousand miles of deadly enemies and unknown dangers.

The green warrior decided to close in and end the battle; just as he rushed me, a blinding light struck full in my eyes, so that I could not see Zad's approach and could only leap blindly to one side to avoid his mighty blade.

It caught me in the left shoulder; but as my vision cleared a sight met my astonished gaze that almost made me forget the fight. Standing on her chariot with Sola and Sarkoja, my beloved Dejah Thoris turned on Sarkoja with the fury of a tigress and struck something that flashed in the sunlight from her upraised hand. Then I knew what had blinded me at that crucial moment, and how Sarkoja had found a way to kill me without herself delivering the final thrust!

Sarkoja, her face livid with baffled rage, whipped out her dagger and aimed a terrific blow at Dejah Thoris—and Zad was once more advancing on me with reddened blade. I felt the steel tear into my chest and all went black before me. . . .

Praise For A Princess of Mars: A Barsoom Novel…

“Might it really be possible—in fact and not in fancy—to venture with John Carter to the Kingdom of Helium on the planet Mars?”—Carl Sagan

Ray Bradbury is the renowned author of numerous novels, plays, and short stories, including The Martian Chronicles, Fahrenheit 451, Dandelion Wine, and the screenplay for John Huston’s 1956 film Moby Dick. He lives in Los Angeles with one wife, three cats, four daughters, and eight grandchildren.
Loading...
or
Not Currently Available for Direct Purchase