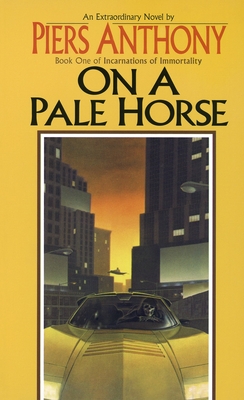 On a Pale Horse (Incarnations of Immortality #1)

In this first novel of the Incarnations of Immortality, Piers Anthony combines a gripping story of romance and conflicting loyalties with a deeply moving examination of the meaning of life and death. This is a novel that will long linger in the reader's mind.

Shooting Death was a mistake, as Zane soon discovered. For the man who killed the Incarnation of Death was immediately forced to assume the vacant position! Thereafter, he must speed over the world, riding his pale horse, and ending the lives of others.

Zane was forced to accept his unwelcome task, despite the rules that seemed woefully unfair. But then he found himself being drawn into an evil plot of Satan. Already the prince of Evil was forging a trap in which Zane must act to destroy Luna, the woman he loved.

He could see only one possible way to defeat the Father of Lies. It was unthinkable—but he had no other solution!