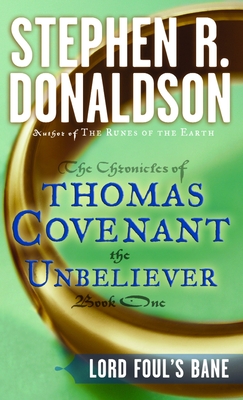 He called himself Thomas Covenant the Unbeliever, because he dared not believe in this strange alternate world on which he suddenly found himself.

Yet the Land tempted him. He had been sick; now he seemed better than ever before. Through no fault of his own, he had been outcast, unclean, a pariah. Now he was regarded as a reincarnation of the Land's greatest hero—Berek Halfhand—armed with the mystic power of White Gold. That power alone could protect the Lords of the Land from the ancient evil of the Despiser, Lord Foul. Except that Covenant had no idea how to use that power. . . .

Stephen R. Donaldson is the bestselling author of the series The Gap Cycle, Mordant's Need, and the Chronicles of Thomas Covenant the Unbeliever, including Lord Foul's Bane and The Second Chronicles of Thomas Covenant; and other works, such as Daughter of Regals and Other Tales and a mystery series under the pseudonym Reed Stephens. He is the recipient of the first prize of the British Science Fiction Society and the John W. Campbell Memorial Award.
Loading...
or support indie stores by buying on