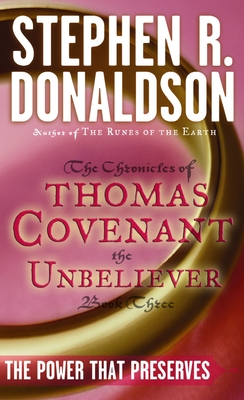 Power That Preserves (The First Chronicles

Twice before Thomas Covenant had been summoned to the strange otherworld where magic worked. Twice before he had been forced to join with the Lords of Revelstone in their war against Lord Foul, the ancient enemy of the Land.

Now he was back—to a Land ravaged by the armies of Lord Foul. The Lords were besieged and helpless. No place was safe, and Foul's victory seemed certain. Only Covenant could avert it. Desperately and without hope, he set out to confront the might of the Enemy. Along with him traveled a Giant, a Bloodguard, and the madwoman he had wronged. And in Foul's Creche, Lord Foul grew in power with each new defeat for the Land. . . .

Stephen R. Donaldson is the bestselling author of the series The Gap Cycle, Mordant's Need, and the Chronicles of Thomas Covenant the Unbeliever, including Lord Foul's Bane and The Second Chronicles of Thomas Covenant; and other works, such as Daughter of Regals and Other Tales and a mystery series under the pseudonym Reed Stephens. He is the recipient of the first prize of the British Science Fiction Society and the John W. Campbell Memorial Award.
Loading...
or support indie stores by buying on
(This book is on backorder)