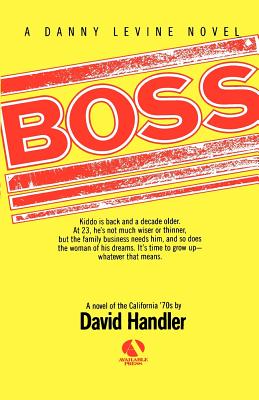 Kiddo is back and a decade older. At 23, he's not much wiser or thinner, but the family business needs him, and so does the woman of his dreams. It's time to grow up--whatever that means.

David Handler, who began his career in New York as a journalist, was born and raised in Los Angeles and published two highly acclaimed novels about growing up there, Kiddo and Boss, before resorting to a life of crime fiction. He has written nine novels about the witty and dapper celebrity ghostwriter Stewart Hoag and his faithful, neurotic basset hound, Lulu, including the Edgar and American Mystery Award–winning The Man Who Would Be F. Scott Fitzgerald and The Girl with Kaleidoscope Eyes. He has also written eleven novels featuring the mismatched crime-fighting duo of New York film critic Mitch Berger and Connecticut State trooper Desiree Mitry.David's short stories have earned him a Derringer Award nomination and other honors. He was a member of the original writing staff that created the Emmy Award–winning sitcom Kate & Allie and has continued to write extensively for television and films on both coasts. He also co-authored the international bestselling thriller Gideon under the pseudonym Russell Andrews. He lives in a 200-year-old carriage house in Old Lyme, Connecticut.
Loading...
or
Not Currently Available for Direct Purchase