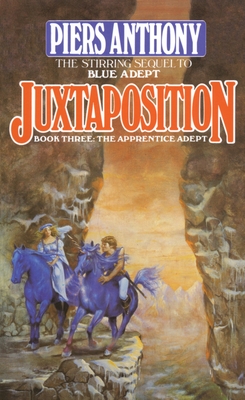 In this brilliantly satisfying conclusion to the epic adventure begun in Split Infinity and continued in Blue Adept, Piers Anthony again proves himself a consummate master of both science fiction and fantasy.

Stile had problems—two whole worlds of problems, in fact.

On Proton, a world of future science, his murder was averted only by the help of a lovely robot, who sent him through an invisible “curtain” to Phaze, an alternate world ruled by magic. There he found he was the double of the sorcerer, the Blue Adept, who had been mysteriously murdered. And the assassin was after Stile!

To survive, Stile had to master magic, fight a dragon, win the friendship of a lady unicorn, locate his enemy among the paranoid Adepts, and return out of Phaze to win the Great Games on Proton. After that, he was ready to face the real problems!

The infallible Oracle was suddenly involved in the conspiracy against him. The two worlds were out of balance and heading for disaster. Stile was somehow supposed to take over the job of saving them or go down to total destruction with all he loved, he had to act and act quickly—with no idea of what he was supposed to do.