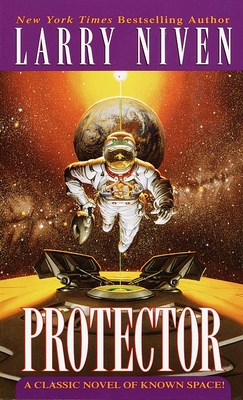 A classic novel of known space

Phssthpok the Pak had been traveling for most of his thirty-two thousand years. His mission: save, develop, and protect the group of Pak breeders sent out into space some two and a half million years before . . .

Brennan was a Belter, the product of a fiercely independent, somewhat anarchic society living in, on, and around an outer asteroid belt. The Belters were rebels, one and all, and Brennan was a smuggler. The Belt worlds had been tracking the Pak ship for days—Brennan figured to meet that ship first . . .

He was never seen again—at least not by those alive at the time.

Larry Niven was born in 1938 in Los Angeles, California. In 1956, he entered the California Institute of Technology, only to flunk out a year and a half later after discovering a bookstore jammed with used science-fiction magazines. He graduated with a B.A. in mathematics (minor in psychology) from Washburn University, Kansas, in 1962, and completed one year of graduate work before he dropped out to write. His first published story, “The Coldest Place,” appeared in the December 1964 issue of Worlds of If. He won the Hugo Award for Best Short Story in 1966 for “Neutron Star” and in 1974 for “The Hole Man.” The 1975 Hugo Award for Best Novelette was given to The Borderland of Sol. His novel Ringworld won the 1970 Hugo Award for Best Novel, the 1970 Nebula Award for Best Novel, and the 1972 Ditmar, an Australian award for Best International Science Fiction.
Loading...
or
Not Currently Available for Direct Purchase