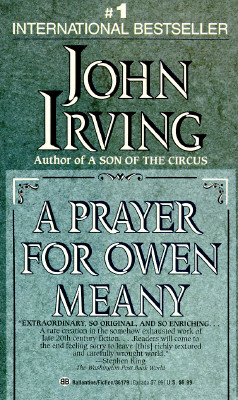 Owen Meany, the only child of a New Hampshire granite quarrier, believes he is God's instrument; he is.
This is John Irving's most comic novel, yet Owen Meany is Mr. Irving's most heartbreaking character.
"Roomy, intelligent, exhilarating and darkly comic...Dickensian in scope....Quite stunning and very ambitious."
LOS ANGELES TIMES BOOK REVIEW
"John Irving is an abundantly and even joyfully talented storyteller."
THE NEW YORK TIMES BOOKR EVIEW

John Irving published his first novel at the age of twenty-six. He has received awards from the Rockefeller Foundation, the National Endowment for the Arts, and the Guggenheim Foundation; he has won an O. Henry Award, a National Book Award, and an Academy Award. Mr. Irving lives with his family in Toronto and Vermont.
Loading...
or
Not Currently Available for Direct Purchase