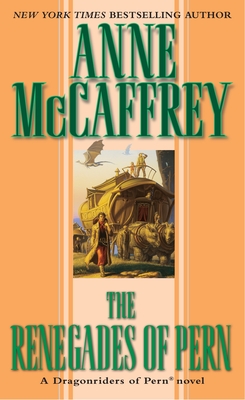 The Renegades of Pern

“[McCaffrey is the] master of the well-told tale.”—Chicago Sun-Times

As long as the people of Pern could remember, the Holds had protected them from Thread, the deadly silver strands that fell from the sky. In exchange for sanctuary in the huge stone fortresses, the people tithed to their Lord Holders, who in turn supported the dragonriders, Pern’s greatest weapon against Thread. But not everyone on Pern was protected. Some, like Jayge’s trader clan, simply preferred the freedom of the roads to the security of a hold. Others, like Aramina’s family, had lost their homes. Regardless of their differences, however, they all feared the outlaws who preyed on holds and holdless alike.

The Lady Thella’s renegades are the most dangerous yet—all they need is Aramina, whose telepathic link with dragons can help them evade the dragonrider patrols. But Jayge is out to stop Thella . . .and he will never let her have Aramina.