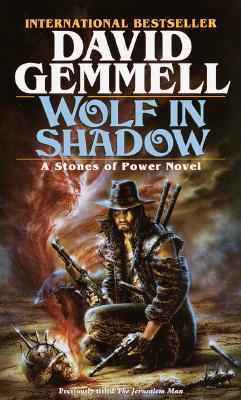 Wolf in Shadow (The Stones of Power

John Shannow, The Jerusalem Man, lived in a world that had toppled on its axis. Civilization had been replaced by ruthlessness and savagery. Relentless in his quest for peace, Shannow followed a path that led only to bloodshed and sorrow.

Abaddon, the Lord of the Pit, sought to plunge mankind into a new Satanic era. His Hellborn army spewed forth from the Plague Lands with an unholy force stemming from human sacrifice. For it was the blood of innocents that fueled the corrupted Sipstrassi Stones of Power—the source of Abaddon's might.

But the Hellborn made a fatal mistake—they took the woman who had stolen Shannow's heart. He would move Heaven and Earth to save her or he would die trying.

Praise For Wolf in Shadow (The Stones of Power: Jon Shannow Trilogy #1)…

David Gemmell was born in London, England, in the summer of 1948. Expelled from school at sixteen, he became a bouncer, working nightclubs in Soho. Born with a silver tongue, Gemmell rarely needed to bounce customers, relying on his gift of gab to talk his way out of trouble. This talent eventually led him to jobs as a freelancer for the London Daily Mail, Daily Mirror, and Daily Express. His first novel, Legend, was published in 1984 and has remained in print ever since. He became a full-time writer in 1986, and his books have consistently topped the London Times bestseller list. David Gemmell died in the summer of 2006.
or support indie stores by buying on
(This book is on backorder)