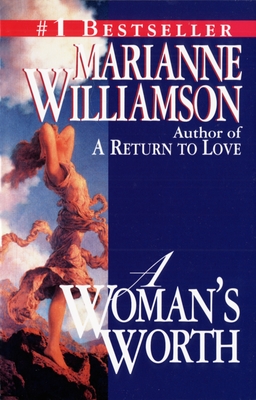 Cutting across class, race, religion, and gender, A Woman's Worth speaks powerfully and persuasively to a generation in need of healing, and in search of harmony.

With A Woman's Worth, Marianne Williamson turns her charismatic voice—and the same empowering, spiritually enlightening wisdom that energized her landmark work, A Return to Love— to exploring the crucial role of women in the world today. Drawing deeply and candidly on her own experiences, the author illuminates her thought-provoking positions on such issues as beauty and age, relationships and sex, children and careers, and the reassurance and reassertion of the feminine in a patriarchal society.

A native of Houston, Texas, Marianne Williamson has been lecturing on metaphysics and spirituality since 1983. She founded the meals-on-wheels program Project Angel Food, which has served more than 10 million meals since 1989. She also cofounded the Peace Alliance and serves on the board of directors of the poverty nonprofit RESULTS. She has published 12 books, several of which have been New York Times bestsellers. An internationally acclaimed spiritualist, Williamson has appeared on numerous television programs, such as Good Morning America, The Oprah Winfrey Show, Larry King Live, Charlie Rose, and Bill Maher.
Loading...
or support indie stores by buying on