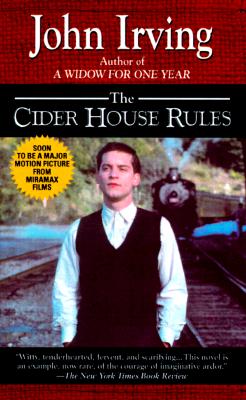 "AN OLD-FASHIONED, BIG-HEARTED NOVEL . . . with its epic yearning caught in the 19th century, somewhere between Trollope and Twain . . . The rich detail makes for vintage Irving."
--The Boston Sunday Globe "The Cider House Rules is filled with people to love and to feel for. . . . The characters in John Irving's novel break all the rules, and yet they remain noble and free-spirited. Victims of tragedy, violence, and injustice, their lives seem more interesting and full of thought-provoking dilemmas than the lives of many real people."
--The Houston Post "John Irving's sixth and best novel . . . He is among the very best storytellers at work today. At the base of Irving's own moral concerns is a rare and lasting regard for human kindness."
--The Philadelphia Inquirer "Entertaining and affecting . . . John Irving is the most relentlessly inventive writer around. He proliferates colorful incidents and crotchets of character. . . . A truly astounding amount of artistry and ingenuity."
--The San Diego Union.

Praise For The Cider House Rules…

"Superb in scope and originality, a novel as good as one could hope to find from any author, anywhere, anytime. Engrossing, moving, thoroughly satisfying."
--Joseph Heller

JOHN IRVING was born in Exeter, New Hampshire, in 1942. His first novel, Setting Free the Bears, was published in 1968, when he was twenty-six. He competed as a wrestler for twenty years, and coached wrestling until he was forty-seven. Mr. Irving has been nominated for a National Book Award three times--winning once, in 1980, for his novel The World According to Garp. He received an O. Henry Award in 1981 for his short story "Interior Space." In 2000, Mr. Irving won the Oscar for Best Adapted Screenplay for The Cider House Rules. In 2013, he won a Lambda Literary Award for his novel In One Person. An international writer--his novels have been translated into more than thirty-five languages--John Irving lives in Toronto. His all-time best-selling novel, in every language, is A Prayer for Owen Meany. Avenue of Mysteries is his fourteenth novel. From the Trade Paperback edition.
Loading...
or
Not Currently Available for Direct Purchase