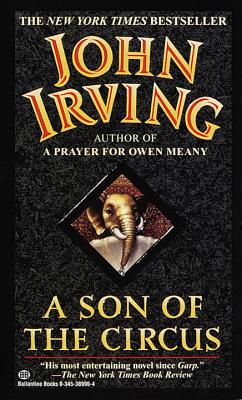 A Son of the Circus

"A SON OF THE CIRCUS IS COMIC GENIUS....GET READY FOR IRVING'S MOST RAUCOUS NOVEL TO DATE."
--The Boston Globe
"Dr. Farrokh Daruwalla, reared in Bombay by maverick foes of tradition, educated in Vienna, married to an Austrian and long a resident of Toronto, is a 59-year-old without a country, culture or religion to call his own....The novel may not be 'about' India, but Irving's imagined India, which Daruwalla visits periodically, is a remarkable achievement--a pandemonium of servants and clubmen, dwarf clowns and transvestite whores, missionaries and movie stars. This is a land of energetic colliding egos, of modern media clashing with ancient cultures, of broken sexual boundaries."
--New York Newsday
"HIS MOST DARING AND MOST VIBRANT NOVEL...The story of circus-as-India is told with gusto and delightful irreverence."
--Bharati Mukherjee
The Washington Post Book World
"Ringmaster Irving introduces act after act, until three (or more) rings are awhirl at a lunatic pace....[He] spills characters from his imagination as agilely as improbable numbers of clowns pile out of a tiny car....His Bombay and his Indian characters are vibrant and convincing."
--The Wall Street Journal
"IRRESISTIBLE...POWERFUL...Irving's gift for dialogue shines."
--Chicago Tribune