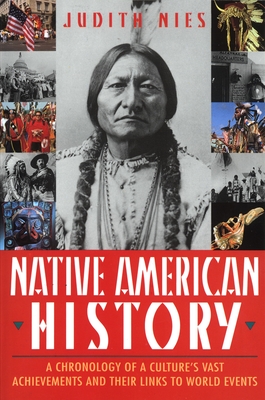 A NEW PERSPECTIVE ON NATIVE AMERICAN HISTORY:
A CHRONOLOGICAL ACCOUNT OF ITS PLACE ON THE WORLD STAGE.
Native American History is a breakthrough reference guide, the first book of its kind to recognize and explore the rich, unfolding experiences of the indigenous American peoples as they evolved against a global backdrop. This fascinating historical narrative, presented in an illuminating and thought-provoking time-line format, sheds light on such events as:
* The construction of pyramids--not only on the banks of the Nile but also on the banks of the Mississippi
* The development of agriculture in both Mesopotamia and Mexico
* The European discovery of a continent already inhabited by some 50 million people
* The Native American influence on the ideas of the European Renaissance
* The unacknowledged advancements in science and medicine created by the civilizations of the new world
* Western Expansion and its impact on Native American land and traditions
* The key contributions Native Americans brought to the Allied victory of World War II
And much more!
This invaluable history takes an important first step toward a true understanding of the depth, breadth, and scope of a long-neglected aspect of our heritage.

Judith Nies is the author of four nonfiction books, including Unreal City. Nies is also the author of Nine Women: Portraits from the American Radical Tradition, which has been in print for more than thirty years, and Native American History, which won the Phi Alpha Theta award in international history.
Loading...
or support indie stores by buying on