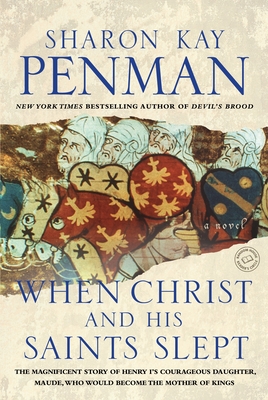 When Christ and His Saints Slept

A.D. 1135. As church bells tolled for the death of England's King Henry I, his barons faced the unwelcome prospect of being ruled by a woman: Henry's beautiful daughter Maude, Countess of Anjou. But before Maude could claim her throne, her cousin Stephen seized it. In their long and bitter struggle, all of England bled and burned.

Sharon Kay Penman's magnificent fifth novel summons to life a spectacular medieval tragedy whose unfolding breaks the heart even as it prepares the way for splendors to come—the glorious age of Eleanor of Aquitaine and the Plantagenets that would soon illumine the world.

Praise For When Christ and His Saints Slept: A Novel…

"[A] marvelous medieval pageant of a novel. . .Another jewel in [Penman's] already glittering crown."—Orlando Sentinel

"Penman once again tells a tale of kings and queens, singular destinies, and double-crosses. . . .[She] inventively animates a large cast [and] continues to base her narrative on the firm ground of fact."—Kirkus Reviews

"A COMPELLING, WELL-WRITTEN EPIC…Penman is an accomplished novelist and certainly has staked a claim to medieval England as her literary fiefdom."—Philadelphia Inquirer

Sharon Kay Penman has lived in England and Wales and currently resides in New Jersey. She is the author of six other novels: Falls the Shadow, Here Be Dragons, The Reckoning, The Sunne in Splendour, When Christ and His Saints Slept, and the first Justin de Quincy adventure: The Queen’s Man.
Loading...
or support indie stores by buying on
(This book is on backorder)