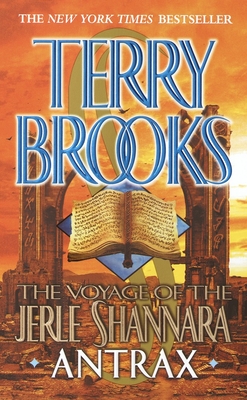 “If Harry Potter has given you a thirst for fantasy and you have not discovered the magic of Terry Brooks, you are in for a treat.”—Rocky Mountain News

Brave explorers led by the last Druid, Walker Boh, traveled across unknown seas in search of an elusive magic. But now it seems that Walker and his team were lured there for sinister, unforeseen purposes. As the crew aboard the airship Jerle Shannara is being attacked by evil forces, the Druid’s protégé, Bek Rowe, and his companions are being pursued by the mysterious Ilse Witch. Meanwhile, Walker is alone, caught in a dark maze beneath the ruined city of Castledown, stalked by a hungry, unseen enemy. It is alive, but not human, coveting the magic of Druids, elves, even the Ilse Witch. It hunts men for its own designs. It is Antrax: a spirit that feeds off enchantment and traps the souls of men. And with it, the fate of the Four Lands hangs in the balance.

“Antrax is great, and it confirms Terry’s place at the head of the fantasy world.”—Philip Pullman, author of The Golden Compass and The Amber Spyglass

Praise For The Voyage of the Jerle Shannara: Antrax…

Praise for The Voyage of the Jerle Shannara: Ilse Witch

"Even readers who haven't read a Terry Brooks title since his classic Sword of Shannara will welcome The Voyage of the Jerle Shannara: Ilse Witch . . . The action and creatures come fast and furious. . . . This latest volume finds Mr. Brooks' power ascending."
--The Dallas Morning News

"The myriad Shannara fans will relish the adventure, the mystery, the magic, and the well-developed characters . . . The ending is a gripping cliff-hanger."
--Booklist

"The Shannara mythology gains a new level of history and depth in a tale that should appeal to the series' legions of fans."
--Library Journal