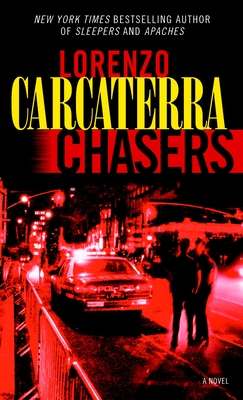 From the bestselling author of Sleepers and former writer/producer of Law & Order comes another high-octane New York City crime drama pulsing with energy. In Lorenzo Carcaterra’s Chasers, the street-smart and highly specialized cadre of renegade NYPD cops last depicted in his acclaimed novel Apaches returns in a new tale of action and suspense.

It’s 1985, and the city that never sleeps is about to wish it had stayed in bed. The heinous machine-gun murder of innocent bystanders in a Manhattan restaurant shocks all five boroughs. The brutal slaying propels the surviving members of the Apaches–controversial, take-’em-down, outside-the-law ex-cops–into investigating a Colombian drug cartel responsible for distributing millions of kilos of cocaine on American shores.

Along for the harrowing ride with Boomer, Dead-Eye, and Reverend Jim are three new Apaches: Ash, a wounded female Hispanic cop who specializes in arson investigations; Quincy, an HIV-positive recruit who’s a forensics expert; and a retired police dog named Buttercup, a Neapolitan bullmastiff who is no ordinary animal but a gold-shield detective, highly decorated for his skills at sniffing out illegal drugs. Now this dedicated team will become Chasers, working multiple cases that will converge into one explosive, all-out street war.

They will face a gallery of formidable enemies: Quinones, a mysterious and deadly assassin; the Boiler Man, a killer as ruthless as he is cunning; Angel, a former priest turned cartel boss, determined to end his career as the richest drug baron in the world; and the G-Men, a band of dealers and doers determined to maintain their iron grip on the cocaine trade–no matter how much blood is spilled.

Fueled by Lorenzo Carcaterra’s adrenaline-rush prose and peopled with uncommon heroes and merciless crime lords tearing through city streets, Chasers proves to be this acclaimed author’s most intense novel to date.

Praise For Chasers: A Novel…

“Paradise City has it all: revenge, international locations, and crime-family intrigue.”
–The Detroit News

“A powerful read . . . with plenty of action and dialogue as authentic as the streets of New York.”
–St. Petersburg Times

“[A] fast-paced adventure . . . pure storytelling joy, with some eye-popping surprises along the way.”
–The New York Sun

“One of the most intriguing writers around . . . Readers will no doubt die for this stuff.”
–Newsweek

“A compellingly readable novel . . . Think of it as The Magnificent Seven Does New York.”
–The Dallas Morning News

Lorenzo Carcaterra is the author of Paradise City, Street Boys, Gangster, A Safe Place, and the New York Times bestsellers Sleepers and Apaches. He has written scripts for movies and television, and has worked as a writer and producer for Law & Order. Learn more about his work at www.LorenzoCarcaterra.com.
Loading...
or
Not Currently Available for Direct Purchase