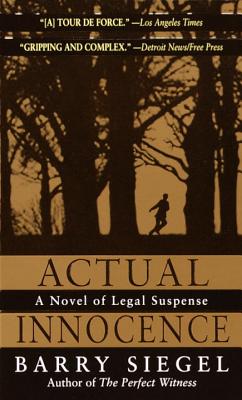 California lawyer Greg Monarch was in no mood for visitors. But it's not every day a federal judge comes knocking at his door, especially with a curious request: to review the final appeal of a murderer on Death Row who personally asked for Greg's assistance. Tired of defending killers, Greg has every intention of turning the case down--until he discovers the prisoner is a former lover he hasn't seen in two decades: the fiery, impetuous Sarah Trant.

Her fate determined in a verdict rendered five years before, Sarah was found guilty of slashing an old man's throat in central California's sheltered El Nido Valley. All subsequent appeals have been denied. Now, six months from execution, she turns to the one man she hopes can save her. Greg failed once before trying to rescue Sarah from her private demons. This time, however, the demons may not be just in her head. . . .

Barry Siegel is the author of three previous books: The Perfect Witness, Shades of Gray: Ordinary People in Extraordinary Circumstances, and A Death in White Bear Lake, which was nominated for an Edgar Award in the Best Fact Crime category. He is an award-winning reporter for the Los Angeles Times

"A POWERFUL CONTEMPORARY TALE, ENRICHED BY SURPRISING EXAMPLES OF HOW THE LAW WORKS AND HOW IT FAILS."
--Los Angeles Times
or
Not Currently Available for Direct Purchase
Copyright © 2020 American Booksellers Association