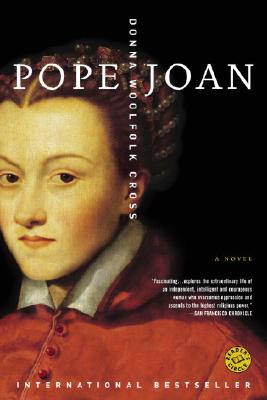 For a thousand years men have denied her existence--Pope Joan, the woman who disguised herself as a man and rose to rule Christianity for two years. Now this compelling novel animates the legend with a portrait of an unforgettable woman who struggles against  restrictions her soul cannot accept.

When her older brother dies in a Viking attack, the brilliant young Joan assumes his identity and enters a Benedictine monastery where, as  Brother John Anglicus, she distinguishes herself as a scholar and healer. Eventually drawn to Rome, she soon becomes enmeshed in a dangerous mix of powerful passion and explosive politics that threatens her life even as it elevates her to the highest throne in the Western world.

"Brings the savage ninth century vividly to life in all its alien richness. An enthralling, scholarly historical novel."
--Rebecca Fraser, Author of The Brontës

"No one knows for sure if Pope Joan, or Pope John Anglicus as she called
herself, really existed.--After finishing Donna Cross' novelization of
Joan's life, one may want her to be a real person, only because it is so
gratifying to read about those rare heroes whose strength of vision
enables them to ignore the almost overpowering messages of their own
historical periods."


"A remarkable woman uses her considerable intellect--and more than a
little luck--to rise from humble origins to become the only female Pope,
in this breakneck adventure from newcomer Cross."


"--Cross' drama draws predictable conclusions about the way a woman might
handle power, but given the certain punishment that awaits Joan should
anyone discover her secret, this cross-dressing saga is also a page
turner."


"In her first novel, Donna Woolfolk Cross--illuminates the Dark Ages and
its attendant milieu of barbarism, politics, bigotry, and religion.
Pope Joan also is a story of passion and faith--and a reminder that
something never change, only the stage and the players do."


"Cross succeeds admirably, grounding her fast-moving tale in a wealth of
rich historical detail. If Joan wasn't pope, she should have been."


"A fascinating and moving account of a woman's determination to learn
despite the opposition of family and society. Highly recommended."