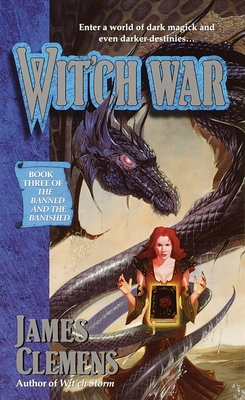 The Banned and the Banished: Book #3

In her hands, the young wit’ch Elena holds the awesome energies of blood magick, and the destiny of Alasea. For the fate of that fabulous kingdom hinges on her recovery of the Blood Diary. Only by mastering the secrets recorded in its pages can Elena defeat the evil magicks of the Dark Lord. But the Diary lies hidden in A’loa Glen–the fabled city that belongs to Shorkan, chief lieutenant of the Dark Lord, and his fearsome army.

With the help of her allies, including the ocean-dwelling Sy-wen and her great dragon, Elena prepares a desperate invasion of A’loa Glen. At her side stands the one-armed warrior Er’ril, who knows how to unlock the wards that surround the Blood Diary. But unknown to Elena, Er’ril is the brother of the dreaded Shorkan. Will he continue to act as her protector, or will he choose to betray her?

Praise For Wit'ch War: The Banned and the Banished: Book #3…

“Clemens has constructed a world of magic that’s never been seen before, with a cast of beings who are so engaging and entrancing that you never want the story to end.”
–JOHN SAUL


“FRESH IN THE DETAIL AND LIVELY IN THE TELLING.”
–Kirkus Reviews

James Clemens was born in Chicago, Illinois, in 1961. With his three brothers and three sisters, he was raised in the Midwest and rural Canada. He attended the University of Missouri and graduated with a doctorate in veterinary medicine in 1985. The lure of ocean, sun, and new horizons eventually drew him to the West Coast, where he established his veterinary practice in Sacramento, California. He is the author of Wit’ch Fire and Wit’ch Storm. Under the name James Rollins, he is also the author of the national bestseller Subterranean.
Loading...
or
Not Currently Available for Direct Purchase