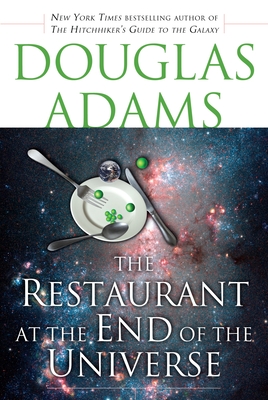 Among Arthur’s motley shipmates are Ford Prefect, a longtime friend and expert contributor to The Hitchhiker’s Guide to the Galaxy; Zaphod Beeblebrox, the three-armed, two-headed ex-president of the galaxy; Tricia McMillan, a fellow Earth refugee who’s gone native (her name is Trillian now); and Marvin, the moody android. Their destination? The ultimate hot spot for an evening of apocalyptic entertainment and fine dining, where the food speaks for itself (literally).

Douglas Adams was born in 1952 and created all the various and contradictory manifestations of The Hitchhiker’s Guide to the Galaxy: radio, novels, TV, computer games, stage adaptations, comic book, and bath towel. He was born in Cambridge and lived with his wife and daughter in Islington, London, before moving to Santa Barbara, California, where he died suddenly in 2001.
Loading...
or support indie stores by buying on
(This book is on backorder)