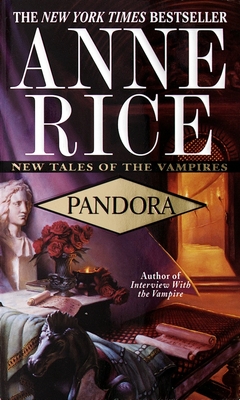 Pandora (New Tales of the Vampires #1)

Anne Rice, creator of the Vampire Lestat, the Mayfair witches and the amazing worlds they inhabit, now gives us the first in a new series of novels linked together by the fledgling vampire David Talbot, who has set out to become a chronicler of his fellow Undead.

The novel opens in present-day Paris in a crowded café, where David meets Pandora. She is two thousand years old, a Child of the Millennia, the first vampire ever made by the great Marius. David persuades her to tell the story of her life.

Pandora begins, reluctantly at first and then with increasing passion, to recount her mesmerizing tale, which takes us through the ages, from Imperial Rome to eighteenth-century France to twentieth-century Paris and New Orleans. She carries us back to her mortal girlhood in the world of Caesar Augustus, a world chronicled by Ovid and Petronius. This is where Pandora meets and falls in love with the handsome, charismatic, lighthearted, still-mortal Marius. This is the Rome she is forced to flee in fear of assassination by conspirators plotting to take over the city. And we follow her to the exotic port of Antioch, where she is destined to be reunited with Marius, now immortal and haunted by his vampire nature, who will bestow on her the Dark Gift as they set out on the fraught and fantastic adventure of their two turbulent centuries together.

Praise For Pandora (New Tales of the Vampires #1)…

"SEDUCTIVE . . . [RICE] HAS RETURNED TO THE SOURCE OF HER BEST WORK, her sexy and invincible vampires. . . . Pandora is a superheroine: beautiful, of course, but also smart, fearless, independent, lusty, resourceful, and so pumped up at the end of her breathless narrative, she takes off for New Orleans, hot on the trail of Lestat and Marius."
--Booklist

"EERILY VIBRANT . . . The title character is a highborn woman of Augustan Rome who later names herself after the Pandora of mythology, opening her own box of surprises. Sitting in a modern-day Paris café in the aftermath of a fresh kill, the vampire Pandora accepts the challenge of recounting her history and immediately sets to work, filling the blank pages of an elegant leatherbound notebook. . . . A wealth of narrative twists and period detail."
--The New York Times Book Review

"RICE'S MOST BEAUTIFULLY WRITTEN WORK . . . A BOOK THAT CELEBRATES THE WONDER OF THE WORLD ON EVERY PAGE."
--Raleigh News & Observer

Anne Rice is the author of thirty-seven books, including the Vampire Chronicles, the Lives of the Mayfair Witches, and the Wolf Gift book series. Rice was born in New Orleans in 1941 and grew up there and in Texas. She lived in San Francisco with her husband, the poet and painter, Stan Rice until 1988, when they returned to New Orleans to live with their son, Christopher. In 2006, Rice moved to Rancho Mirage, California. She died in 2021.
Loading...
or support indie stores by buying on