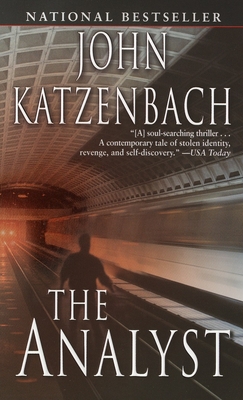 Happy fifty third birthday, Doctor. Welcome to the first day of your death. Dr. Frederick Starks, a New York psychoanalyst, has just received a mysterious, threatening letter. Now he finds himself in the middle of a horrific game designed by a man who calls himself Rumplestiltskin. The rules: in two weeks, Starks must guess his tormentor’s identity. If Starks succeeds, he goes free. If he fails, Rumplestiltskin will destroy, one by one, fifty-two of Dr. Starks’ loved ones—unless the good doctor agrees to kill himself. In a blistering race against time, Starks’ is at the mercy of a psychopath’s devious game of vengeance. He must find a way to stop the madman—before he himself is driven mad. . . .

John Katzenbach has written seven previous novels: the Edgar Award-nominated In the Heat of the Summer, which was adapted for the screen as The Mean Season; the New York Times bestseller The Traveler; Day of Reckoning; Just Cause, which was also made into a movie; The Shadow Man (another Edgar nominee); State of Mind, and Hart’s War. Mr. Katzenbach has been a criminal court reporter for The Miami Herald and Miami News and a featured writer for the Herald’s Tropic magazine. He lives in western Massachusetts.
Loading...
or support indie stores by buying on