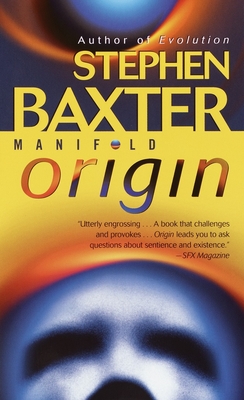 “One of the best SF writers in the business . . . [Manifold: Origin is] filled with marvelous scientific speculations, strange events, novel concepts, and an awe-inspiring sense of the wonders of the universe.”—Science Fiction Chronicle

In the year 2015, astronaut Reid Malenfant is flying over the African continent, intent on examining a mysterious glowing construct in Earth’s orbit. But when the very fabric of the sky tears open, spilling living creatures to the ground and pulling others inside (including his wife, Emma), Malenfant’s quest to uncover the unknown becomes personal. While desperately searching to discover what happened to the woman he loves, Malenfant embarks upon an adventure to the very fount of human development . . . on earth and beyond.

“A FUN AND FASCINATING READ . . . Armed with degrees in both mathematics and aeroengineering research, Baxter has the scientific and intellectual clout to present a compelling premise of evolution.”
–The Flint Journal

“BAXTER IS A DEEP THINKER AND A VISIONARY WRITER.”
–DAVID BRIN

Stephen Baxter is a trained engineer with degrees from Cambridge (mathematics) and Southampton Universities (doctorate in aeroengineering research). Baxter is the winner of both the British Science Fiction Award and the Locus Award, as well as being a nominee for an Arthur C. Clarke Award, most recently for Manifold: Time. His novel Voyage won the Sidewise Award for Best Alternate History Novel of the Year; he also won the John W. Campbell Award and the Philip K. Dick Award for his novel The Time Ships.
Loading...
or
Not Currently Available for Direct Purchase