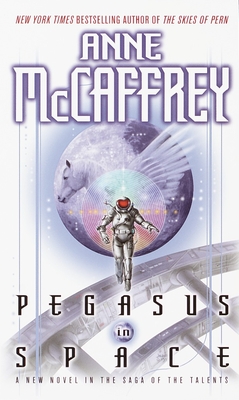 Pegasus in Space (The Talents Saga #3)

In a triumphant career spanning more than thirty years, Anne McCaffrey has won the devotion of millions of fans. Now she has written the exciting and long-awaited addition to her classic Pegasus series—and the perfect link to her bestselling Rowan saga . . .

For an overpopulated Earth whose resources are strained to the breaking point, there is only one place to look for relief: straight up. With the successful completion of the Padrugoi Space Station, humanity has at last achieved its first large-scale permanent presence in space. But there are those who, for motives of their own, want Padrugoi to fail. Standing in their way are the Talented, men and women gifted with extraordinary mental powers that have made them as feared as they are respected--and utterly indispensable to the colonization effort. Now, as sabotage and attempted murder strike the Station, it's up to the Talented to save the day. Only who is going to save the Talented?

Pegasus in Space is the tale of Peter Reidinger, first Tower Prime!

Praise For Pegasus in Space (The Talents Saga #3)…

Anne McCaffrey was born in Cambridge, Massachusetts. She graduated cum laude from Radcliffe College, majoring in Slavonic Languages and Literatures. Before her success as a writer, she was involved in theater. She directed the American premiere of Carl Orff's Ludus de Nato Infante Mirificus, in which she also played a witch. Her first novel, Restoree, was written as a protest against the absurd and unrealistic portrayals of women in science fiction novels in the 50s and early 60s. Ms. McCaffrey is best known, however, for her handling of broader themes and the worlds of her imagination, particularly in her tales of the Talents and the fourteen novels about the Dragonriders of Pern.

McCaffrey lives in a house of her own design, Dragonhold-Underhill, in County Wicklow, Ireland.
Loading...
or
Not Currently Available for Direct Purchase