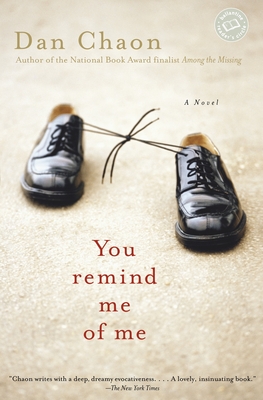 With his critically acclaimed Among the Missing and Fitting Ends, award-winning author Dan Chaon proved himself a master of the short story form. He is a writer, observes the Chicago Tribune, who can “convincingly squeeze whole lives into a mere twenty pages or so.” Now Chaon marshals his notable talents in his much-anticipated debut novel.

You Remind Me of Me begins with a series of separate incidents: In 1977, a little boy is savagely attacked by his mother’s pet Doberman; in 1997 another little boy disappears from his grandmother’s backyard on a sunny summer morning; in 1966, a pregnant teenager admits herself to a maternity home, with the intention of giving her child up for adoption; in 1991, a young man drifts toward a career as a drug dealer, even as he hopes for something better. With penetrating insight and a deep devotion to his characters, Dan Chaon explores the secret connections that irrevocably link them. In the process he examines questions of identity, fate, and circumstance: Why do we become the people that we become? How do we end up stuck in lives that we never wanted? And can we change the course of what seems inevitable?

Praise For You Remind Me of Me: A Novel…

“You Remind Me of Me is one of the strangest, most beautiful, most compelling books I’ve read in a long time. Unnerving and real, intricately plotted, wonderfully written, it’s a Chinese box of a novel, full of hidden pleasures and surprises.”
—ELIZABETH MCCRACKEN, author of The Giant’s House
and Niagara Falls All Over Again

“One of Dan Chaon’s many gifts is his ability to probe deeply and delicately into sorrow. This gift serves him beautifully in You Remind Me of Me, a novel about adoption, about the quiet sadness that lies at the bottom of all his characters’ troubles.”
—JANE HAMILTON, author of A Map of the World

“Dan Chaon’s beautiful, effortless prose commands the reader from sentence one, steering us from prickling unease to wrenching pathos, tunneling inside his characters’ minds and worlds with such authority that everything else seems to disappear. It’s almost frightening to be in the hands of so gifted a writer.”
—JENNIFER EGAN, author of Look at Me and The Invisible Circus

“Beautiful, painful, and sure footed, You Remind Me of Me tracks the delicate connections between a handful of lost and poignant lives, in the process giving them the radiance of a stained-glass window. What a writer. Dan Chaon is going to have a breathtaking literary career.”
—PETER STRAUB, author of lost boy lost girl

“Dan Chaon’s novel, You Remind Me of Me, is nothing short of brilliant. The novel is haunting me, and I can’t stop thinking about it—both as a reader and as a deeply admiring writer. I wish I had a better adjective than superb.”
—CAROLINE LEAVITT, author of Girls in Trouble

Dan Chaon is the acclaimed author of Fitting Ends and Among the Missing, a finalist for the National Book Award, which was also listed as one of the ten best books of the year by the American Library Association, Chicago Tribune, The Boston Globe, and Entertainment Weekly, as well as being cited as a New York Times Notable Book. Chaon’s fiction has appeared in numerous journals and anthologies, and won both Pushcart and O. Henry awards. Chaon teaches at Oberlin College and lives in Cleveland Heights, Ohio, with his wife and two sons.
Loading...
or support indie stores by buying on