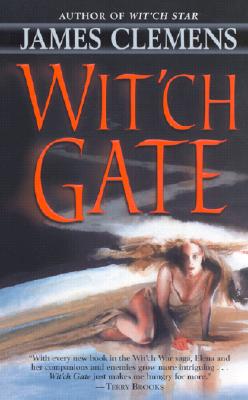 Wit'ch Gate (The Banned and The Banished #4)

“A WORLD OF MAGIC THAT’S NEVER BEEN SEEN BEFORE.”
–JOHN SAUL

In a spectacular feat of daring and magic, Elena and her army of outlaws and rebels have defeated evil’s minions and released the mystic secrets of the Blood Diary. But the malevolent Dark Lord has unleashed the Weirgates–black wells of ferocious energy that are his greatest source of power. Now Elena’s bravest allies are sent to find and destroy the Gates. As they face their own demons along the way, Elena herself must journey to Gul’gotha. Daring to venture into the enemy’s lair, she must emerge victorious if she is to reveal the secret of the Dark Lord’s identity–and the shocking nature of his vast powers.

Praise For Wit'ch Gate (The Banned and The Banished #4)…


“Grabs at your heart and tears a little hole, then tears another, and another–a brutal and beautiful ride.”
–R. A. SALVATORE

“Clemens has constructed a world of magic that’s never been seen before, with a cast of beings who are so engaging and entrancing that you never want the story to end. . . . His imagery is so brilliant that every scene comes instantly to life, and while everything seems immediately familiar, the reader soon learns to expect a new surprise with every page. And just as you think he can’t possibly come up with anything else, a new character bursts upon the tale, bringing along a whole new level of sorcery!”
–JOHN SAUL

“Compelling . . . The author supplies enough plot twists to keep the reader guessing what will happen next.”
–Publishers Weekly

James Clemens was born in Chicago, Illinois, in 1961. With his three brothers and three sisters, he was raised in the Midwest and rural Canada. He attended the University of Missouri and graduated with a doctorate in veterinary medicine in 1985. The lure of ocean, sun, and new horizons eventually drew him to the West Coast, where he established his veterinary practice in Sacramento, California. He is the author of Wit’ch Fire, Wit’ch Storm, Wit’ch War, and Wit’ch Star. Under the name James Rollins, he is also the author of the national bestseller Subterranean.
Loading...
or
Not Currently Available for Direct Purchase