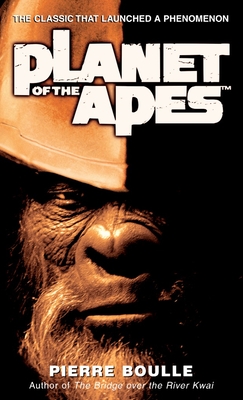 Planet of the Apes

The original novel that inspired the films!

In the not-too-distant future, three astronauts land on what appears to be a planet just like Earth, with lush forests, a temperate climate, and breathable air. But while it appears to be a paradise, nothing is what it seems.

They soon discover the terrifying truth: On this world humans are savage beasts, and apes rule as their civilized masters. In an ironic novel of nonstop action and breathless intrigue, one man struggles to unlock the secret of a terrifying civilization, all the while wondering: Will he become the savior of the human race, or the final witness to its damnation? In a shocking climax that rivals that of the original movie, Boulle delivers the answer in a masterpiece of adventure, satire, and suspense.

Pierre Boulle was born in Avignon, France in 1912. He originally trained as an engineer, but in 1936 went to Malaysia as a rubber planter. In 1939 he was called up in the French forces in Indochina. When France fell during World War II, he fled to Singapore, where he joined the Free French Mission. After the Japanese invasion, he was sent via Rangoon and the Burma Road to Yunnan to establish contact with Kuomintang forces. He infiltrated Indochina as a guerilla where he was captured in 1943. He escaped in 1944, was picked up by a British plane, and served in the Special Forces in Calcutta for the rest of the war.

His first novel published in the United States was The Bridge on the River Kwai. It was awarded the Prix Ste. Beuve in France, and led to the motion picture that received an amazing seven Academy Awards. He considered his subsequent books, of which Planet of the Apes is the most well-known, to be social fantasies.
Loading...
or support indie stores by buying on