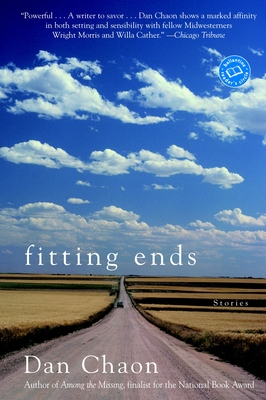 Fitting Ends is the first collection of fiction by the acclaimed author of the National Book Award finalist Among the Missing and now appears in this newly revised edition with two never before collected stories.

Chaon is one of the most promising new voices in fiction, and this re-issued collection offers further evidence of his unique talent.

“The best of these stories . . . possess a rare, disorienting force. When you look up from them, the quality of light seems a little different. It’s a reminder to those of us who have almost forgotten what literature can sometimes do.”
—Boston Book Review

“The most honest, observant and timely book written this year about the American generation now approaching thirty . . . Chaon speaks with clarity of feeling, and more than a little oddball wit, about the lives of those left behind the demographic curve of America—men and woman with pointless jobs, doughy faces, soured relationships, bad credit. . . . Each story pulls you into its subtle emotional vortex, largely because of Chaon’s knack for simple but poignant detail.”
—New York Newsday

“Remarkable . . . Each story is a marvel of complexity, dense with meaning and nuance. . . . Very few first works are as solid, moving, and pitch-perfect as Chaon’s.”
—The Cleveland Plain Dealer

“Powerful . . . A writer to savor . . . Dan Chaon shows a marked affinity in both setting and sensibility with fellow Midwesterners Wright Morris and Willa Cather.”
—Chicago Tribune

Dan Chaon is the acclaimed author of Among the Missing, which was a finalist for the National Book Award; You Remind Me of Me, which was named one of the best books of the year by The Washington Post, San Francisco Chronicle, and Entertainment Weekly, among other publications; Await Your Reply, which was a New York Times Notable Book and appeared on more than a dozen best-of-the-year lists; Stay Awake; and Ill Will. Chaon has been a finalist for the National Magazine Award in Fiction, and he was the recipient of the 2006 Academy Award in Literature from the American Academy of Arts and Letters. He lives in Cleveland, Ohio, and teaches at Oberlin College, where he is the Pauline M. Delaney Professor of Creative Writing.
Loading...
or
Not Currently Available for Direct Purchase