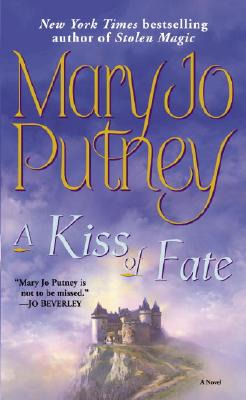 A Kiss of Fate (Paperback)

Her captivating stories and vibrant characters have earned New York Times bestselling author Mary Jo Putney enthusiastic praise from reviewers and readers alike. Now, from the majestic mansions of eighteenth-century London to the mist-shrouded wilds of the Scottish Highlands, she brings you her most breathtaking romantic adventure yet.

Laird of an ancient, powerful Scottish clan, Duncan Macrae is committed to ending the ceaseless strife between Scotland and England. But he also has other, secret powers—those of a Guardian, humans with mystical abilities to control nature’s forces and see into the hearts of others. And from the moment he encounters the young and independent English widow Gwyneth Owens, his fiery spirit is irrevocably drawn to claim her as his own—a passion that will not only set his loyalty to his land against his sworn Guardian vows, but will also threaten everything he cherishes most.

Though Gwynne’s father was a Guardian, she believes that she has inherited only her mother’s beauty, not her father’s power. Then one kiss from the dangerously alluring Laird of the Macraes ignites a hunger that shakes her to her soul—and reveals visions of a looming catastrophe that threatens England and Scotland both. Only by becoming Duncan’s wife, and ultimately betraying the man she loves, can she avert disaster.

As destiny and two mighty nations clash, Gwynne and Duncan must push their powers and passions beyond the most forbidden limits if they are to save their love—and secure the future.

With Mary Jo Putney’s consummate skill and dazzling historical detail, A Kiss of Fate brings an unforgettable period to life—and will forever enthrall your senses with memorable characters and sweeping emotions.

A New York Times, Wall Street Journal, and Publishers Weekly bestselling author, Mary Jo Putney is a graduate of Syracuse University with degrees in eighteenth-century literature and industrial design. A nine-time finalist in the Romance Writers of America RITA contests, she has won two RITAS, four consecutive Golden Leaf Awards for Best Historical Romance, the Romantic Times Career Achievement Award for Historical Romance, and has four times had books listed by the American Library Association as among the top five romances of the year. Her books have also received frequent awards from online reader sites such as The Romance Reader, All About Romance, Romance Readers Anonymous, and Under the Covers Awards. The author of more than two dozen novels, Ms. Putney lives near Baltimore, Maryland.

Praise For A Kiss of Fate: A Novel (Guardians #1)…

“[Putney] has few peers when it comes to creating emotionally satisfying romances that connect with readers.”
—Library Journal

“PUTNEY [IS] ADEPT AT ATMOSPHERE, PACE, AND EROS.”
—The Baltimore Sun

“Putney knows how to create characters attractive enough to enchant readers without being too good to be true.”
—Publishers Weekly

“MARY JO PUTNEY IS NOT TO BE MISSED!”
—JO BEVERLEY