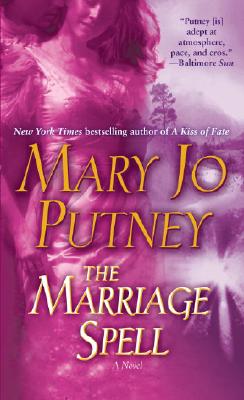 New York Times bestselling author Mary Jo Putney is acclaimed by critics and readers alike for unforgettable storytelling and arresting characters. Now she introduces a Regency England you’ve never seen before, where dazzling magic is practiced in all but the highest reaches of Society, and where desire is the most mysterious and seductive force of all.

One of the Duke of Wellington’s most respected officers, Jack Langdon, Lord Frayne, takes his family’s honor very seriously. He also hides a shameful secret: a talent for sorcery he has been raised to suppress and openly reject. But after an injury lands Jack at death’s door, his only chance at survival lies with Abigail Barton, a peer’s daughter and a skilled wizard. Her price: Jack’s hand in marriage. It isn’t long before Jack feels an irresistible attraction to his forthright new wife, whose allure is as intense as the reawakening magical abilities he can no longer deny.

Abigail had to make a great sacrifice to perform a spell powerful enough to save Lord Frayne, and although she cannot help but be drawn to her reluctant husband’s surprising sensitivity and kindness, she knows all too well his distaste for magic. Once she has Jack’s name and the child she has always longed for, she is determined to live apart from him so that he can preserve his reputation–and so that she herself can stay true to her gifts.

But neither Abby nor Jack reckons on the deep, long-simmering passions her spell ignites. They challenge each other’s extraordinary powers and deepest desires for the sake of a love that may cost them all they cherish most.

With breathtaking skill and vivid historical detail, Mary Jo Putney weaves a tale of enchantment, mystery, and romance that will forever hold you spellbound.

Praise For The Marriage Spell: A Novel…

Praise for Mary Jo Putney and A Kiss of Fate

“Mesmerizing in its emotional breadth, stunning in its backdrop, and spellbinding in its paranormal overtones . . . a marvelous, fast-paced tale.”
–Romantic Times

“A gifted writer with an intuitive sense of what makes romance work!”
–Amanda Quick

“Putney [is] adept at atmosphere, pace, and eros.”
–Baltimore Sun

“Mary Jo Putney is not to be missed.”
–Jo Beverley

A New York Times, Wall Street Journal, and Publishers Weekly bestselling author, Mary Jo Putney is a graduate of Syracuse University with degrees in eighteenth-century literature and industrial design. The author of more than two dozen novels, Putney has been a nine-time finalist in the Romance Writers of America RITA contests, and has won two RITAs, four consecutive Golden Leaf Awards for Best Historical Romance, as well as the Romantic Times Career Achievement Award for Historical Romance. Her books have been listed four times by Library Journal as among the top five romances of the year. Putney lives near Baltimore, Maryland, with her nearest and dearest, both two- and four-footed.