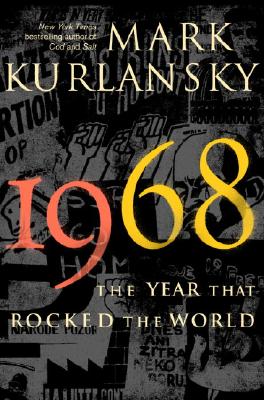 The Year That Rocked the World

In this monumental new book, award-winning author Mark Kurlansky has written his most ambitious work to date: a singular and ultimately definitive look at a pivotal moment in history.

With 1968, Mark Kurlansky brings to teeming life the cultural and political history of that world-changing year of social upheaval. People think of it as the year of sex, drugs, and rock and roll. Yet it was also the year of the Martin Luther King Jr. and Bobby Kennedy assassinations; the riots at the Democratic National Convention in Chicago; Prague Spring; the antiwar movement and the Tet Offensive; Black Power; the generation gap, avant-garde theater, the birth of the women’s movement, and the beginning of the end for the Soviet Union. From New York, Miami, Berkeley, and Chicago to Paris, Prague, Rome, Berlin, Warsaw, Tokyo, and Mexico City, spontaneous uprisings occurred simultaneously around the globe.

Everything was disrupted. In the Middle East, Yasir Arafat’s guerilla organization rose to prominence . . . both the Cannes Film Festival and the Venice Biennale were forced to shut down by protesters . . . the Kentucky Derby winner was stripped of the crown for drug use . . . the Olympics were a disaster, with the Mexican government having massacred hundreds of students protesting police brutality there . . . and the Miss America pageant was stormed by feminists carrying banners that introduced to the television-watching public the phrase “women’s liberation.”
Kurlansky shows how the coming of live television made 1968 the first global year. It was the year that an amazed world watched the first live telecast from outer space, and that TV news expanded to half an hour. For the first time, Americans watched that day’s battle–the Vietnam War’s Tet Offensive–on the evening news. Television also shocked the world with seventeen minutes of police clubbing demonstrators at the Chicago convention, live film of unarmed students facing Soviet tanks in Czechoslovakia, and a war of starvation in Biafra. The impact was huge, not only on the antiwar movement, but also on the medium itself. The fact that one now needed television to make things happen was a cultural revelation with enormous consequences.

In many ways, this momentous year led us to where we are today. Whether through youth and music, politics and war, economics and the media, Mark Kurlansky shows how, in 1968, twelve volatile months transformed who we are as a people. But above all, he gives a new understanding to the underlying causes of the unique historical phenomenon that was the year 1968. Thoroughly researched and engagingly written–full of telling anecdotes, penetrating analysis, and the author’s trademark incisive wit–1968 is the most important book yet of Kurlansky’s noteworthy career.

“In this highly opinionated and highly readable history, Kurlansky makes a case for why 1968 has lasting relevance in the United States and around the world. Whether you agree or disagree with its points, you’ll find it makes for fascinating reading.”
—DAN RATHER, CBS News