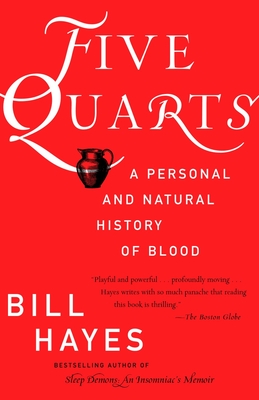 A Personal and Natural History of Blood

“This beguiling brew of fascinating scientific facts and illuminating, poignant anecdotes makes Five Quarts something like blood itself: vital and pulsing with energy.”
–Entertainment Weekly

From ancient Rome, where gladiators drank the blood of vanquished foes to gain strength and courage, to modern-day laboratories, where machines test blood for diseases and scientists search for elusive cures, Bill Hayes takes us on a whirlwind journey through history, literature, mythology, and science by way of the great red river that runs five quarts strong through our bodies. Hayes also recounts the impact of the vital fluid in his daily life, from growing up in a household of five sisters and their monthly cycles to his enduring partnership with an HIV-positive man. As much a biography of blood as it is a memoir of how this rich substance has shaped one man’s life, Five Quarts is by turns whimsical and provocative, informative and moving.

Praise For Five Quarts: A Personal and Natural History of Blood…

“Playful and powerful . . .profoundly moving . . . Hayes writes with so much panache that reading this book is thrilling.”
–The Boston Globe

"Bill Hayes is on his way to becoming one of those rare authors who can tackle just about any subject in book form, and make you glad he did. . . . [Five Quarts is] a breezy ride of a book that . . . equips even a casual reader with the knowledge to gain new insights into life.”
–San Francisco Chronicle

“Hayes’s fascination with scientific discovery is matched by his unerring sense for the right phrase, the right anecdote, to draw others into his delight and wonder.”
–The Advocate

“The perfect gift for the phlebotomist in your life.”
–Newsweek (Top Pick of the Week)

The recipient of a Guggenheim Fellowship in nonfiction, Bill Hayes is a frequent contributor to The New York Times and the author of four books: Sleep Demons: An Insomniac’s Memoir, Five Quarts: A Personal and Natural History of Blood, The Anatomist: A True Story of Gray’s Anatomy, and Insomniac City: New York, Oliver, and Me (coming February 2017), and is currently at work on a new book Sweat: A History of Exercise.

A photographer as well as a writer, his photos have appeared in The New Yorker, Vanity Fair, Granta, The Wall Street Journal, and on CBS Evening News.  His portraits of his partner, the late Oliver Sacks, appear in the recent collection of Dr. Sacks’s suite of final essays Gratitude.

Hayes has been a visiting scholar at the American Academy in Rome, the recipient of a Leon Levy Foundation grant, and a Resident Writer at Blue Mountain Center. He has also served as a guest lecturer at Stanford, NYU, UCSF, University of Virginia, and the New York Academy of Medicine.
Loading...
or
Not Currently Available for Direct Purchase