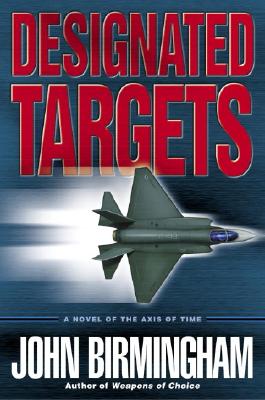 A Novel of the Axis of Time

It’s World War II and the A-bomb is here to stay.
The only question: Who’s going to drop it first?

The Battle of Midway takes on a whole new dimension with the sudden appearance of a U.S.-led naval task force from the twenty-first century, the result of a botched military experiment. State-of-the-art warships are scattered across the Pacific, armed to the teeth with the latest instruments of mass destruction.

Nuclear warheads, rocket-propelled grenades, AK-47s, computer-guided missiles–all bets are off as the major powers of 1942 scramble to be the first to wield the weapons of tomorrow against their enemies. The whole world now knows of the Allied victory in 1945, and the collapse of communism decades later. But that was the first time around.

With the benefit of their newly acquired knowledge, Stalin and Hitler rapidly change strategies. A Russian-German ceasefire leaves the Führer free to bring the full weight of his vaunted Nazi war machine down on England, while in the Pacific, Japan launches an invasion of Australia, and Admiral Yamamoto schemes to seize an even greater prize . . . Hawaii.

Even in the United States the newcomers from the future are greeted with a combination of enthusiasm and fear. Suspicion leads to hatred and erupts into violence.

Suddenly it’s a whole new war, with high-tech, high-stakes international manipulations from Tokyo to D.C. to the Kremlin. As the world trembles on the brink of annihilation, Churchill, Stalin, Roosevelt, Hitler, and Tojo confront extreme choices and a future rife with possibilities–all of them apocalyptic.


Praise For Designated Targets: A Novel of the Axis of Time…

“[A] weapons-grade military techno-thriller . . . It’s like a Clive Cussler novel fell into a transporter beam with a Stephen Ambrose history, and they came out all fused together.”
–Time

“High-tech intrigue and suspense similar to the works of Tom Clancy.”
–Library Journal