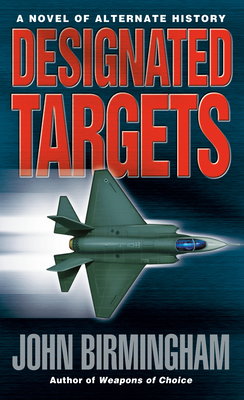 It’s World War II and the A-bomb is here to stay. The only question: Who’s going to drop it first?

The Battle of Midway was forever transformed by the devastating appearance of a U.S.-led naval task force from the twenty-first century. Since that day, state-of-the-art warships have prowled the Pacific, armed with the latest instruments of mass destruction, as the warring powers of 1942 scramble to be first to wield the weapons of tomorrow against their enemies. Russia and Germany form a deadly alliance, while Admiral Yamamoto moves to seize Hawaii and invade Australia.

Suddenly it’s a whole new war with unimaginable high-tech tools, and high-stakes inter-national betrayals from Tokyo to Washington to the Kremlin. As the world trembles on the brink of anni-hilation, Churchill, Stalin, Roosevelt, Hitler, and Tojo confront extreme choices and a future rife with possi-bilities—all of them apocalyptic.

“[A] weapons-grade military techno-thriller . . . It’s like a Clive Cussler novel fell into a transporter beam with a Stephen Ambrose history, and they came out all fused together.”—Time

“High-tech intrigue and suspense similar to the works of Tom Clancy.”—Library Journal

John Birmingham is the author of Emergence, Resistance, Ascendance, After America, Without Warning, Final Impact, Designated Targets, Weapons of Choice, and other novels, as well as Leviathan, which won the National Award for Nonfiction at Australia’s Adelaide Festival of the Arts, and the novella Stalin’s Hammer: Rome. He has written for The Sydney Morning Herald, Rolling Stone, Penthouse, Playboy, and numerous other magazines. He lives at the beach with his wife, daughter, son, and two cats.
Loading...
or support indie stores by buying on
(This book is on backorder)