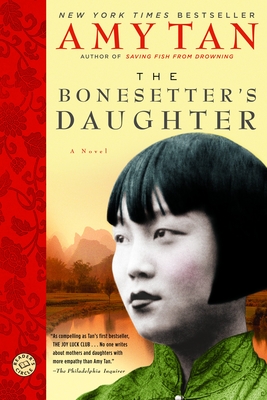 ““As compelling as Tan’s first bestseller, The Joy Luck Club. . . No one writes about mothers and daughters with more empathy than Amy Tan.”
–The Philadelphia Inquirer

“[An] absorbing tale of the mother-daughter bond . . . this book sing[s] with emotion and insight.”
–People


Ruth Young and her widowed mother, LuLing, have always had a tumultuous relationship. Now, before she succumbs to forgetfulness, LuLing gives Ruth some of her writings, which reveal a side of LuLing that Ruth has never known. . . .

In a remote mountain village where ghosts and tradition rule, LuLing grows up in the care of her mute Precious Auntie as the family endures a curse laid upon a relative known as the bonesetter. When headstrong LuLing rejects the marriage proposal of the coffinmaker, a shocking series of events are set in motion–all of which lead back to Ruth and LuLing in modern San Francisco. The truth that Ruth learns from her mother’s past will forever change her perception of family, love, and forgiveness.

“Tan at her best . . . rich and hauntingly forlorn . . . The writing is so exacting and unique in its detail.”
–San Francisco Chronicle

“POIGNANT AND BITTERSWEET . . . A STORY OF SECRETS AND REVELATION, ESTRANGEMENT AND RECONCILIATION.”
–Rocky Mountain News

Amy Tan is the author of The Joy Luck Club, The Kitchen God’s Wife, The Hundred Secret Senses, and two children’s books, The Moon Lady and The Chinese Siamese Cat, which has been adapted as Sagwa, a PBS series for children. Tan was also the co-producer and co-screenwriter of the film version of The Joy Luck Club, and her essays and stories have appeared in numerous magazines and anthologies. Her work has been translated into more than twenty-five languages. Tan, who has a master’s degree in linguistics from San Jose University, has worked as a language specialist to programs serving children with developmental disabilities. She lives with her husband in San Francisco and New York.
Loading...
or support indie stores by buying on