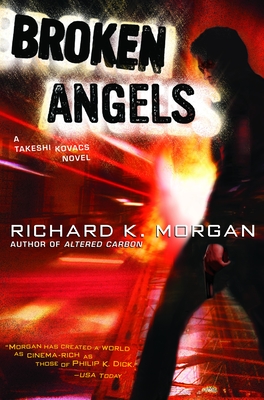 Welcome back to the brash, brutal new world of the twenty-fifth century: where global politics isn’t just for planet Earth anymore; and where death is just a break in the action, thanks to the techno-miracle that can preserve human consciousness and download it into one new body after another.

Cynical, quick-on-the-trigger Takeshi Kovacs, the ex-U.N. envoy turned private eye, has changed careers, and bodies, once more . . . trading sleuthing for soldiering as a warrior-for-hire, and helping a far-flung planet’s government put down a bloody revolution.

But when it comes to taking sides, the only one Kovacs is ever really on is his own. So when a rogue pilot and a sleazy corporate fat cat offer him a lucrative role in a treacherous treasure hunt, he’s only too happy to go AWOL with a band of resurrected soldiers of fortune. All that stands between them and the ancient alien spacecraft they mean to salvage are a massacred city bathed in deadly radiation, unleashed nanotechnolgy with a million ways to kill, and whatever surprises the highly advanced Martian race may have in store. But armed with his genetically engineered instincts, and his trusty twin Kalashnikovs, Takeshi is ready to take on anything—and let the devil take whoever’s left behind.

“Morgan writes with . . . panache and conviction. . . . Drenched in brutality and yet with a sensitivity in the [narrative], it seems a fairly safe bet Morgan’s going to be a heavy hitter in the genre.”
—SFX magazine

“FAST-PACED AND POPULATED WITH A DELICIOUSLY SEEDY CAST.”
—Locus

Richard K. Morgan is the acclaimed author of The Cold Commands, The Steel Remains, Thirteen, Woken Furies, Market Forces, Broken Angels, and Altered Carbon, a New York Times Notable Book that also won the Philip K. Dick Award in 2003. The movie rights to Altered Carbon were optioned by Joel Silver and Warner Bros on publication, and a film version is currently in development with Mythology Entertainment. Market Forces was also optioned to Warner Bros, before it was even published, and it won the John W. Campbell Award in 2005. Thirteen won the Arthur C. Clarke Award in 2007 and is currently under movie option to Straight Up films. The Steel Remains won the Gaylactic Spectrum Award in 2010, and its sequel, The Cold Commands, appeared in both Kirkus Reviews’ and NPR’s Best Science Fiction/Fantasy Books of the Year lists. Morgan is a fluent Spanish speaker and has lived and worked in Madrid, Istanbul, Ankara, and London, as well as having traveled extensively in the Americas, Africa, and Australia. He now lives in Scotland with his wife, Virginia, and son, Daniel.
Loading...
or support indie stores by buying on