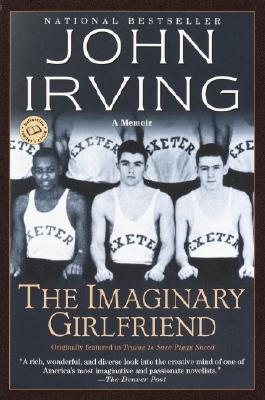 “The Imaginary Girlfriend is a miniature autobiography detailing Irving’s parallel careers of writing and wrestling. . . . Tales of encounters with writers (John Cheever, Nelson Algren, Kurt Vonnegut) are intertwined with those about his wrestling teammates and coaches. With humor and compassion, [Irving] details the few truly important lessons he learned about writing. . . . And in beefing up his narrative with anecdotes that are every bit as hilarious as the antics in his novels, Irving combines the lessons of both obsessions (wrestling and writing) . . . into a somber reflection on the importance of living well.”
–The Denver Post

Praise For The Imaginary Girlfriend…

“THE NEAREST THING TO AN AUTOBIOGRAPHY IRVING HAS WRITTEN . . . WORTH SAVING AND SAVORING.”
–The Seattle Times

“IRVING’S WRESTLING COACHES, HIS WRITING MENTORS, AND HIS FAMILY ARE VIVID, INVITING READERS INTO A COLORFUL WORLD.”
–USA Today

“A MASTERPIECE . . . THE GENEROSITY OF SPIRIT THAT MARKS HIS FICTION LEAKS INTO HIS MEMOIR IN TENDER AND SURPRISING WAYS.”
–Edmonton Journal