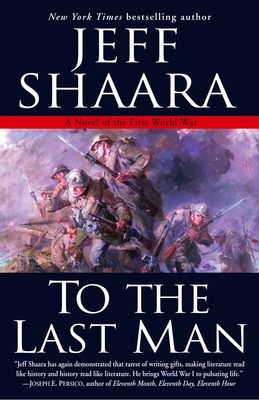 To the Last Man

Praise For To the Last Man: A Novel of the First World War…

Praise for To the Last Man

“A gripping account of World War I–from tactics to strategy. The reader feels the horror of the trenches in France and is drawn into the maneuvering of political and military leaders on both sides of the battle. Jeff Shaara shows the dominance of the U.S. military in the context of coalition warfare–as relevant today as it was in 1918.”
–GENERAL TOMMY R. FRANKS

“A sweeping, searching look at World War I. Jeff Shaara’s novel rings with authenticity, from the feelings of frontline soldiers to the challenges of high-level command.”
–GENERAL WESLEY CLARK

“Jeff Shaara has again demonstrated that rarest of writing gifts, making literature read like history and history read like literature. He has now shone that talent on another era as he brings World War I to pulsating life.”
–JOSEPH E. PERSICO, author of Eleventh Month, Eleventh Day, Eleventh Hour

“The best novel about the Great War since Remarque’s All Quiet on the Western Front, which it greatly surpasses in depth, scope, and intensity. . . . This account of how the war was really fought will be a real eye opener for anyone interested in historical fiction or modern history.”
–JOHN MOSIER, author of The Myth of the Great War

“A riveting masterpiece revolving around the ghastly conflict that still profoundly defines the world we live in. With To the Last Man, Shaara cements his reputation as a war writer of Tolstoyan or Homeric dimensions.”
–STEVE FORBES

“Jeff Shaara’s To the Last Man lets you live WWI in the air, in the mud, and in the councils of government in a way that makes you understand how the participants experienced it. Von Richtofen, Lufbery, Ludendorff, and Pershing come alive.”
–MAJOR GENERAL JOHN S. GRINALDS, U.S. Marine Corps (Ret.),
President, The Citadel

Jeff Shaara is the New York Times bestselling author of A Chain of Thunder, A Blaze of Glory, The Final Storm, No Less Than Victory, The Steel Wave, The Rising Tide, To the Last Man, The Glorious Cause, Rise to Rebellion, and Gone for Soldiers, as well as Gods and Generals and The Last Full Measure—two novels that complete the Civil War trilogy that began with his father’s Pulitzer Prize–winning classic, The Killer Angels. Shaara was born into a family of Italian immigrants in New Brunswick, New Jersey. He grew up in Tallahassee, Florida, and graduated from Florida State University. He lives in Gettysburg.
Loading...
or support indie stores by buying on
(This book is on backorder)