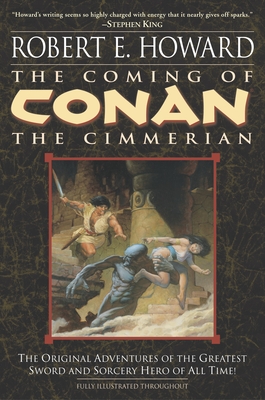 Book One (Conan the Barbarian #1)

Conan is one of the greatest fictional heroes ever created– a swordsman who cuts a swath across the lands of the Hyborian Age, facing powerful sorcerers, deadly creatures, and ruthless armies of thieves and reavers.

“Between the years when the oceans drank Atlantis and the gleaming cities . . . there was an Age undreamed of, when shining kingdoms lay spread across the world like blue mantles beneath the stars. . . . Hither came Conan, the Cimmerian, black-haired, sullen-eyed, sword in hand . . . to tread
the jeweled thrones of the Earth under his sandalled feet.”

In a meteoric career that spanned a mere twelve years before his tragic suicide, Robert E. Howard single-handedly invented the genre that came to be called sword and sorcery. Collected in this volume, profusely illustrated by artist Mark Schultz, are Howard’s first thirteen Conan stories, appearing in their original versions–in some cases for the first time in more than seventy years–and in the order Howard wrote them. Along with classics of dark fantasy like “The Tower of the Elephant” and swashbuckling adventure like “Queen of the Black Coast,” The Coming of Conan the Cimmerian contains a wealth of material never before published in the United States, including the first submitted draft of Conan’s debut, “Phoenix on the Sword,” Howard’s synopses for “The Scarlet Citadel” and “Black Colossus,” and a map of Conan’s world drawn by the author himself.

Here are timeless tales featuring Conan the raw and dangerous youth, Conan the daring thief, Conan the swashbuckling pirate, and Conan the commander of armies. Here, too, is an unparalleled glimpse into the mind of a genius whose bold storytelling style has been imitated by many, yet equaled by none.

Praise For The Coming of Conan the Cimmerian: Book One (Conan the Barbarian #1)…

“Howard’s writing seems so highly charged that it nearly gives off sparks.”—Stephen King

“I adore these books. Howard had a gritty, vibrant style–broadsword writing that cut its way to the heart, with heroes who are truly larger than life. I heartily recommend them to anyone who loves fantasy.”—David Gemmell, author of Legend and White Wolf

“The voice of Robert E. Howard still resonates after decades with readers– equal parts ringing steel, thunderous horse hooves, and spattered blood. Far from being a stereotype, his creation of Conan is the high heroic adventurer. His raw muscle and sinews, boiling temper, and lusty
laughs are the gauge by which all modern heroes must be measured.”—Eric Nyulnd, author of Halo: The Fall of Reach and Signal to Noise

“That teller of marvelous tales, Robert Howard, did indeed create a giant [Conan] in whose shadow other ‘hero tales’ must stand.”–John Jakes, New York Times bestselling author of the North and South trilogy

“For stark, living fear . . . What other writer is even in the running with Robert E. Howard?”—H. P. Lovecraft

Robert E. Howard is one of the most prolific short story writers in American history, and has created such beloved characters as Conan the Barbarian, Kull of Atlantis, Soloman Kane, Bran Mak Morn, El Borak, and Dark Agnès de Chastillon. He tragically passed away in 1936.
Loading...
or support indie stores by buying on