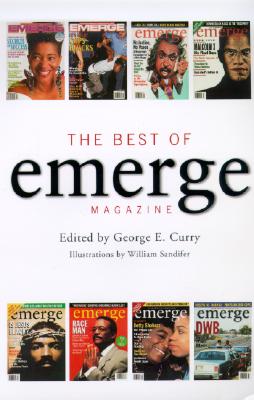 The Best of Emerge Magazine (Paperback)

The 1990s. African Americans achieved more influence and faced more explosive issues than ever before. One word captured those times. One magazine expressed them. "Emerge."
In those ten years, with an impressive circulation of 170,000 and more than forty national awards to its credit, "Emerge" became a serious part of the American mainstream. "Time" hailed its uncompromising voice. "The" "Washington" "Post" declared that "Emerge" gets better with each issue. Then, after nearly a decade, "Emerge" magazine closed its doors. Now, for the first time, here's a collection of the finest articles from a publication that changed the face of African American news.
From the Clarence Thomas nomination to the Bill Clinton impeachment . . . from the life of Louis Farrakhan to the death of Betty Shabazz . . . from reparations for slavery to the rise of blacks on Wall Street . . . the most important people, topics, and turning points of this remarkable period are featured in incisive articles by first-rate writers.
"Emerge" may have ended with the millennium, but as this incomparable volume proves the quality of its coverage is still unequaled, the extent of its impact still emerging. Stirring tribute, uncanny time capsule, riveting read The Best of "Emerge" Magazine is also the best of American journalism.