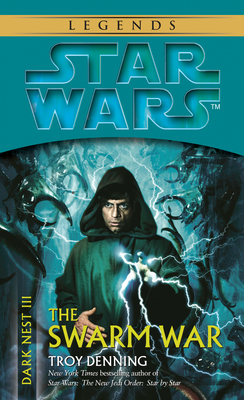 In the explosive conclusion to the Dark Nest trilogy, Luke Skywalker summons the heroes of the New Jedi Order from near and far, as the Star Wars galaxy teeters on the edge of eternal war. Yet even the combined powers of the formidable Jedi may not be enough to vanquish the deadly perils confronting them.

The Chiss-Killik border war is threatening to engulf the entire galaxy and raising the awful specter of Killiks sweeping across space to absorb all living creatures into a single hive mind. The only hope for peace lies with the Jedi–and only if they can not only end the bloodshed between two fierce enemies but also combat the insidious evil spread by the elusive Dark Nest and its unseen queen.

Leia’s newly acquired Jedi skills will be put to the ultimate test in the coming life-and-death battle. As for Luke, he will have to prove, in a lightning display of Force strength and swordplay, that he is– beyond a shadow of a doubt–the greatest Jedi Master in the galaxy.

Troy Denning is the New York Times bestselling author of Star Wars: Tatooine Ghost, Star Wars: The New Jedi Order: Star by Star, and Star Wars: Dark Nest Trilogy, as well as Pages of Pain, Beyond the High Road, The Summoning, and many other novels. A former game designer and editor, he lives in southern Wisconsin with his wife, Andria.
Loading...
or support indie stores by buying on