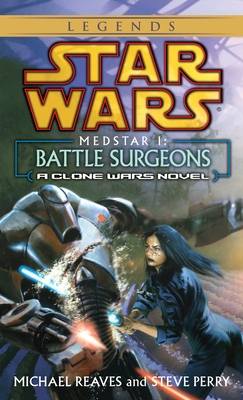 As Civil War between the Republic and the Separatists rages across the galaxy, nowhere is the fighting more fierce than on the swamp world of Drongar, where a beleaguered mobile hospital unit wages a never-ending war of its own . . .

A surgeon who covers his despair with wise-cracks; another who faces death and misery head-on, venting his emotions through beautiful music . . . A nurse with her heart in her work and her eye on a doctor . . . A Jedi Padawan on a healing mission without her Master . . .  These are the core members of a tiny med unit serving the jungle world of Drongar, where battle is waged over the control of a priceless native plant, and an endless line of medlifters brings in the wounded and dying—mostly clone troopers, but also soldiers of all species.

While the healers work desperately to save lives, others plot secretly to profit from the war—either by dealing on the black market or by manipulating the events of the war itself. In the end, though, all will face individual tests, and only those of compassionate hearts and staunch spirits can hope to survive to fight another day.

Michael Reaves received an Emmy Award for his work on the Batman television animated series. He has worked for Spielberg’s DreamWorks, among other studios, and has written fantasy novels and supernatural thrillers. Reaves is the New York Times bestselling author of Star Wars: Darth Maul: Shadow Hunter and the first two Star Wars: Coruscant Nights novels Jedi Twilight and Street of Shadows. He is also the co-writer (with Maya Kaathryn Bohnhoff) of the last two Star Wars: Coruscant Nights novels—Patterns of Force and The Last Jedi—and Star Wars: Shadow Games, as well as (with Steve Perry) Star Wars: Death Star and the Star Wars: MedStar novels Battle Surgeons and Jedi Healer. He lives in the Los Angeles area.
Loading...
or support indie stores by buying on