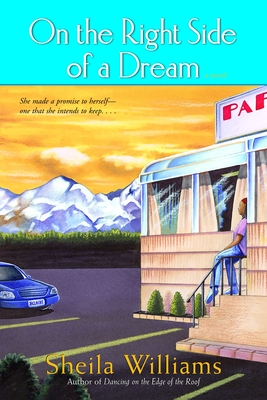 On the Right Side of a Dream

What are you supposed to do with a restored spirit? Eventually, I got some answers. I just didn’t expect to get so many.

When Juanita Lewis arrived in Paper Moon, Montana, courtesy of a Greyhound bus, she was just looking for a brief respite. Instead, she found a home, friends, and a man to love. But this leave-your-attitude-by-the-door woman made a promise to herself–one that she intends to keep. Now that she’s got a place to come back to, Juanita wants to see the world.

A trip out West with her eccentric trucker friend, Peaches, leads to a cooking stint at a new age spa for skinny celebrities. Crazy, but its here that Juanita decides to take her talent for cooking to a new level . . . and make it her dream. She also learns something about life: It does turn out the way you planned it–just be ready to change the plan a few times along the way.

Just as Juanita’s journey begins, she’s called back to Paper Moon, having inherited an old, slightly haunted B&B, as well as a mountain of decisions. There’s her self-centered, irresponsible daughter, insisting that she get some sense and come back home to Columbus, and a son who’s doing things Juanita can’t bear to think about. So how does a middle-aged black woman from the projects follow her heart when it’s heading in so many different directions? By asking the right questions, then listening with her soul.

Sheila Williams was born and raised in Columbus, Ohio. She attended Ohio Wesleyan University and is a graduate of the University of Louisville. She has published four books, including Dancing on the Edge of the Roof. She lives with her family in Newport, Kentucky.
Loading...
or
Not Currently Available for Direct Purchase