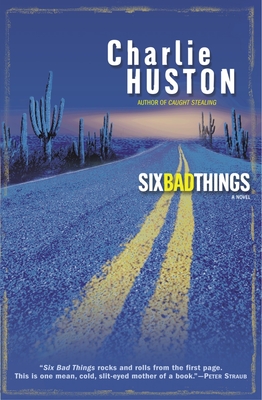 Hank Thompson is living off the map in Mexico with a bagful of cash that the Russian mafia wants back and many, many secrets. So when a Russian backpacker shows up in town asking questions, Hank tries to play it cool. But he knows the jig is up when the backpacker mentions the money . . . and the family Hank left behind. Suddenly Hank’s in a desperate race to get to his parents in California before anyone can harm them. Along the way he’ll face Federales and Border Patrol, mafiosi and vigilantes, extortionists and drug dealers, and a couple of psychotic surf bums with an ax to grind. From the golden beaches of the Yucatán to the seedy strip clubs of Vegas, Charlie Huston opens a door to the squalid underworld of crime and corruption–and invites the reader to live it in the extreme.

“Six Bad Things rocks and rolls from the first page. This is one mean, cold, slit-eyed mother of a book, and Charlie Huston is the real deal.”
–Peter Straub


“SIX BAD THINGS IS RELENTLESS. IT GRABS YOU BY THE THROAT, OR SLIGHTLY LOWER, AND NEVER LETS GO.”
–Jeff Lindsay, author of Darkly Dreaming Dexter

“Charlie Huston is a bad-ass writer, Six Bad Things is a bad-ass book. I loved it, absolutely loved it, as I did his first book. Can’t wait for whatever else comes from him.”
–James Frey, author of A Million Little Pieces

“Charlie Huston is a great wordsmith who also happens to be a great storyteller, and in Six Bad Things he’s produced a novel that is edgy, funny, and suspenseful all at once. It’s a terrific read.”
–David Liss, author of A Spectacle of Corruption

“A body slam of a thriller, crammed to the brim with speed-dial action, scene-chewing dialogue and a throat-clutcher of a plot. The characters are as real as a wanted poster–from Russian gangsters and Mexican feds to businessmen who make the Enron gang look like Britannica salesmen. A smooth blend of the best of Elmore Leonard, George V. Higgins, and Robert B. Parker, Six Bad Things is one great book.”
–Lorenzo Carcaterra, author of Sleepers and Paradise City

“Bloody amazing. He reminds me of all my favorite writers–Pete Dexter, Robert Stone, Crumley. Surprising, funny, compassionate, edge-of-seat stuff, and beautifully written. If there is such a thing as compassionate noir, Charlie has found it. A true marvel.”
–Ken Bruen, author of The Guards

Charlie Huston is the author of the bestsellers The Mystic Arts of Erasing All Signs of Death and The Shotgun Rule, as well as the Henry Thompson trilogy, the Joe Pitt casebooks, and several titles for Marvel Comics. He lives with his family in Los Angeles.
Loading...
or
Not Currently Available for Direct Purchase