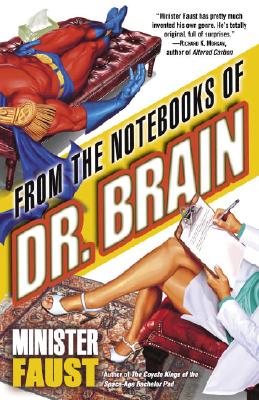 From the Notebooks of Dr. Brain

“An outlandish, outrageous tour de force by the most innovative prose stylist in the field.”
–Robert J. Sawyer, author of Hominids

OMNIPOTENT MAN–a body with the density of steel, and a brain to match

X-MAN–formerly of the League of Angry Blackmen . . . but not formerly enough

Having finally defeated all archenemies, the members of the Fantastic Order of Justice are reduced to engaging in toxic office politics that could very well lead to a superpowered civil war. Only one woman can save them from themselves: Dr. Eva Brain-Silverman, aka Dr. Brain, the world’s leading therapist for the extraordinarily abled.