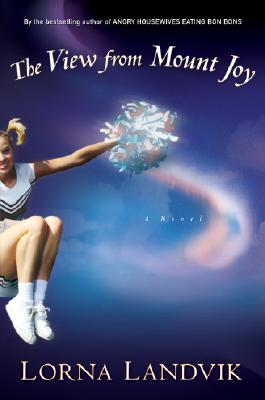 The View from Mount Joy

The View from Mount Joy, Lorna Landvik’s delightfully quirky and intensely moving new novel, is about a man, a supermarket, the roads not taken, and the great, unexpected pleasures found in living a good life.

When hunky teenage hockey player Joe Andreson and his widowed mother move to Minneapolis, Joe falls under the seductive spell of Kristi Casey, Ole Bull High’s libidinous head cheerleader, the kind of girl a guy can’t say no to, even when saying yes guarantees trouble. Joe balances Kristi’s lustful manipulation with the down-to-earth companionship of his smart, platonic girlfriend, Darva. But it is Kristi who will prove to be a temptation (and torment) throughout Joe’s life.

Years later, having once dreamed of a career in pro hockey or as a globetrotting journalist, Joe can’t believe that life has deposited him in the aisles of Haugland Foods. But he soon learns that being a grocer is like being the mayor of a small town: His constituents confide astonishing things and always appreciate the value of a hard-to-pass-up special, a free toy for a well-behaved youngster, a pie for the best rendition of “Alfie,” or simply Joe’s generous dispensing of the milk of human kindness. For Joe, everyday life is its own roller-coaster ride, and all he wants to do is hold on tight.

The path Kristi has charged down, on the other hand, is as wild as Joe’s is tame–or at least that’s how it appears to the outside world. But who has really risked more? Who has lived more? And who is truly happy? As Joe discovers–in this dramatic, heartbreaking, and hilarious novel–sometimes people are lucky enough to be standing in the one place where the view of the world is breathtaking, if only they’ll open their eyes to all there is to see.

The View from Mount Joy is truly glorious: a warm, wonderful picture of life as seen from the deepest places in the heart.

Praise For The View from Mount Joy…

“Landvik is a national treasure whose writing packs a folksy, storytelling punch. . . . The personalities that populate the pages of Depression-era Oh My Stars feel . . . like fast friends. . . . And oh my stars but how [these] pages do fly by!”
–Minneapolis Star Tribune

“Highly entertaining . . . almost as hard to put down [as] Mary McCarthy’s The Group.”
–The Seattle Times

“It is impossible not to get caught up in the lives of the book group members. . . . Landvik’s gift lies in bringing these familiar women to life with insight and humor.”
–The Denver Post

Welcome to the Great Mysterious

“Funny, heartwarming . . . admirably captures the ups and downs of a small town from the humorous perspective of a big-city star.”
–Publishers Weekly

“Geneva is a lovable star who grows in surprising ways.”
–The Orlando Sentinel

Where does the title of the novel come from? In what ways is that scene, which occurs about midway through the book, emblematic of the novel and the relationship between Joe and Kristi?

Does Kristi take advantage of Joe in their relationship, or is it the other way around?

Are Joe’s relationships with women, excepting Darva and Jenny, really that different from Kristi’s with the men in her life? Isn’t he guilty of using women selfishly just as she uses men?

Is Joe a coward for quitting hockey after his college injury? What does that decision say about his character, and are there other times in the novel that Joe makes a similar decision?

What is the bond between Kristi and Joe that connects them over the course of so many years? Is it only sex, or something more? Compare this bond to that existing between Joe and Darva.

Why don’t Darva and Joe ever become a couple? Do you believe their protests that they are really not interested in each other beyond friendship?

Why do you think that Kristi grows up into the kind of woman she becomes? Is anyone or anything responsible? Is she a bad person?

Have you ever known anyone like Kristi? Can such people change?

Is Kristi happy? Does it bother you that Kristi seems to end the novel on a note of triumph? Or is it triumph?

How are the characters of Mount Joy influenced by their families?

Do you think Landvik’s portrait of born-again evangelism is a fair one? Why or why not?

How did your own religious beliefs come into play as you were reading the novel? Do you think this is primarily a religious or a secular book—and why?

Death in Mount Joy comes suddenly, unexpectedly, and for the most part violently. Why does Landvik present death in this way?

Is Joe, looking down on shoppers from his office in the supermarket and orchestrating contests to reward them, a symbol for God? Do you seen any evidence in the book that Landvik might be suggesting God operates in a similar way?

Are Jenny and Flora rewards given to Joe? If so, what is he being rewarded for? And is it right that his reward comes at the expense of Jenny’s divorce and Darva’s death?

As the novel progresses, the events involving Kristi seem to spiral further into realms of satire and hyperbole, while Joe’s portion of the plot remains very down to earth. Why do you think Landvik took this divergent approach? Was she right to do so?

The novel ends before the presidential election. What do you think of the chances for Tuck and Kristy? Would you ever vote for a husband and wife for president and vice president? Why or why not?

Do Joe and the others who know about Kristi’s past do the right thing in not blowing the whistle on her, first in her televangelist phase, and then in her political career? Do people who know things about other people have an obligation to step forward in such circumstances? Would you?

Were you surprised the first time the action in the novel jumped years ahead? Why do you think Landvik broke the flow of her narrative this way?

Is Joe a reliable and trustworthy narrator? Can you identify moments where his interpretation of events is different from yours? Does he ever lie to readers or to himself?